Lance Corporal Thomas (Tomy) Parker enlisted in the Marines in 2009 after graduating from high school. Less than a year later in 2010, Parker came under fire while on patrol with 19 other Marines in Afghanistan's Helmand province. An IED lifted Parker into the air and changed his life forever. At a field hospital, doctors took his left leg up to his hip and amputated his right leg off just above his knee. After a long recovery and a hero's welcome home, Parker has found himself fighting a different kind of battle. “I’ve been to church, the battlefield, the trap house and jail. I didn’t see God in any of those places," Parker said. Three years ago, Parker had a house and a truck, each specially made for him. His addiction to heroin and methamphetamine cost him all of it. 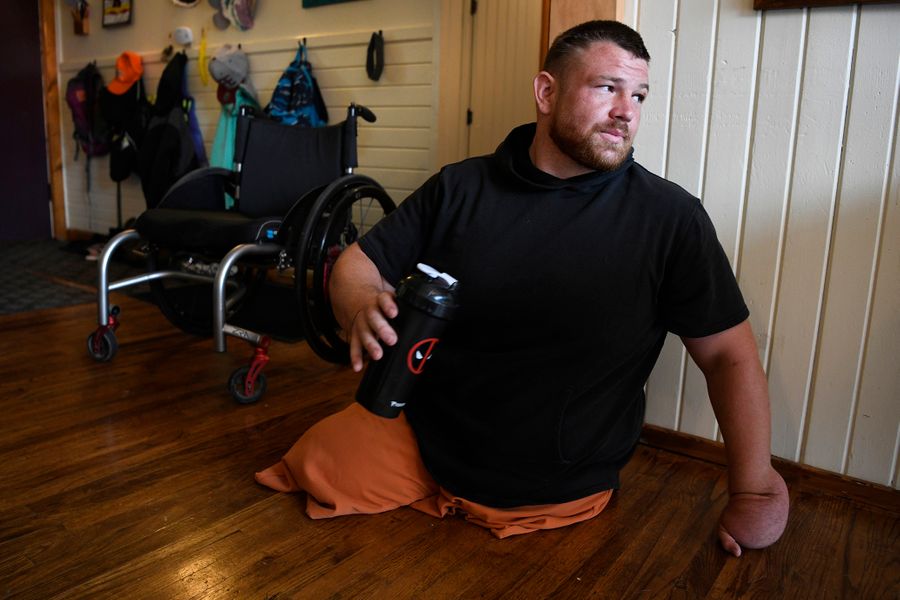 Lance Cpl. Thomas (Tomy) Parker, a 29-year-old Marine Corps veteran and triple amputee, prepares his pre-workout drink before a training session on a hot day in August 2019. Parker often wears the same orange pants he was issued while serving time for possession of methamphetamine and heroin. 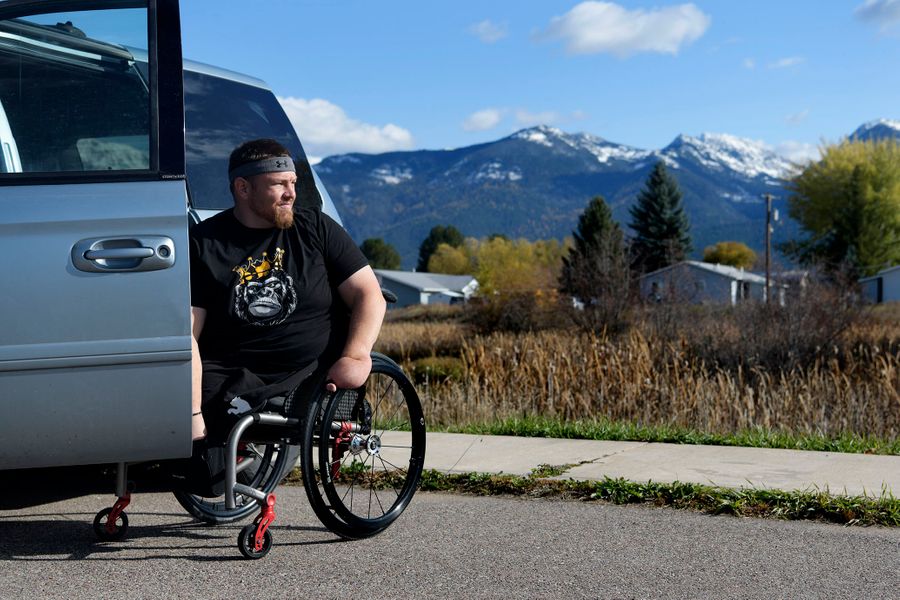 Parker completed his first half-marathon in April, shortly after being released from jail in February of 2019. Parker heard of the Veteran Suicide Awareness and Prevention half-marathon event through court meetings. 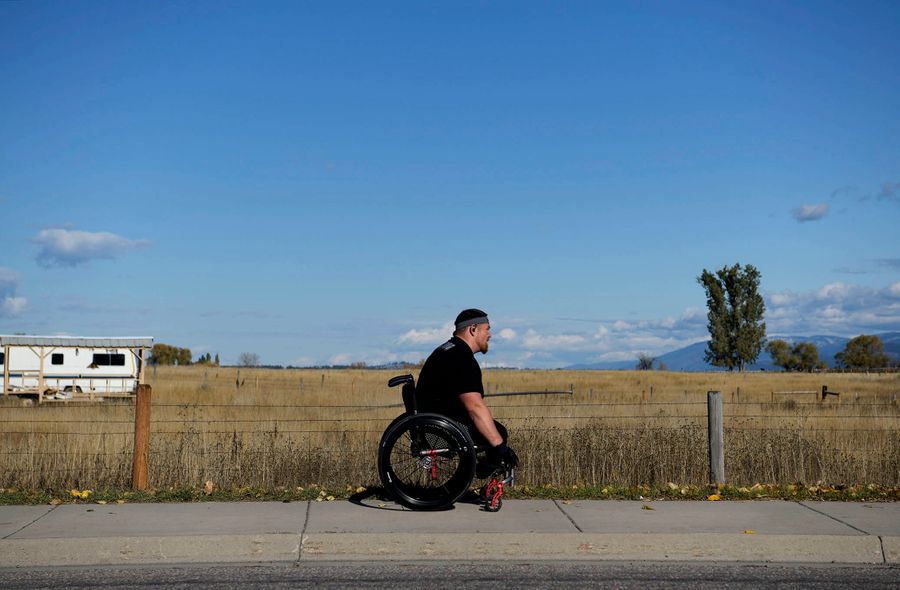 Parker trains near downtown Ronan in 2019. Parker struggled to finish his first half marathon in April as he pushed through immense physical pain. “Pushing past that, I had my first moment of mental clarity in a very long time,” Parker said. Parker finished the Missoula Half Marathon in June 2019 with a time of 1 hour, 52 minutes. 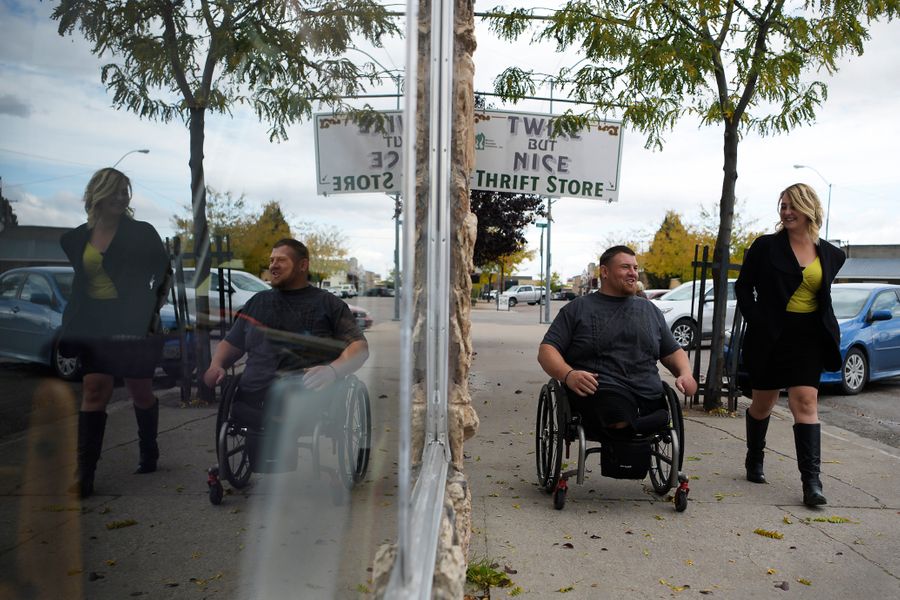 Parker and his girlfriend Dara Rodda share a laugh while walking downtown Ronan, Montana in July of 2019. Parker and Rodda reconnected when they crossed paths at a gas station and Parker asked her to coffee. 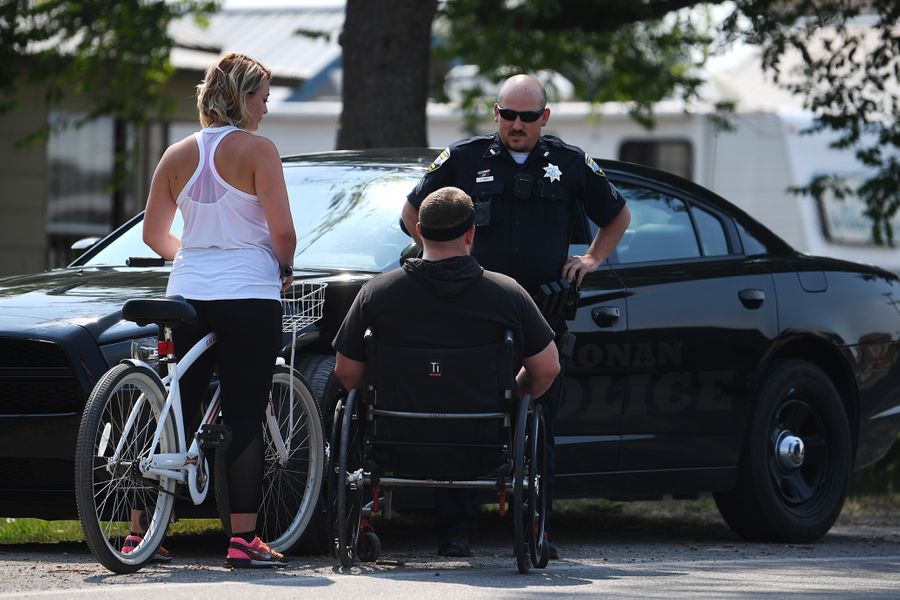 Parker and Rodda speak to a Ronan police officer after he pulled Parker over for "impeding traffic." Parker said it was not the first time he'd been stopped by law enforcement for training in the road. 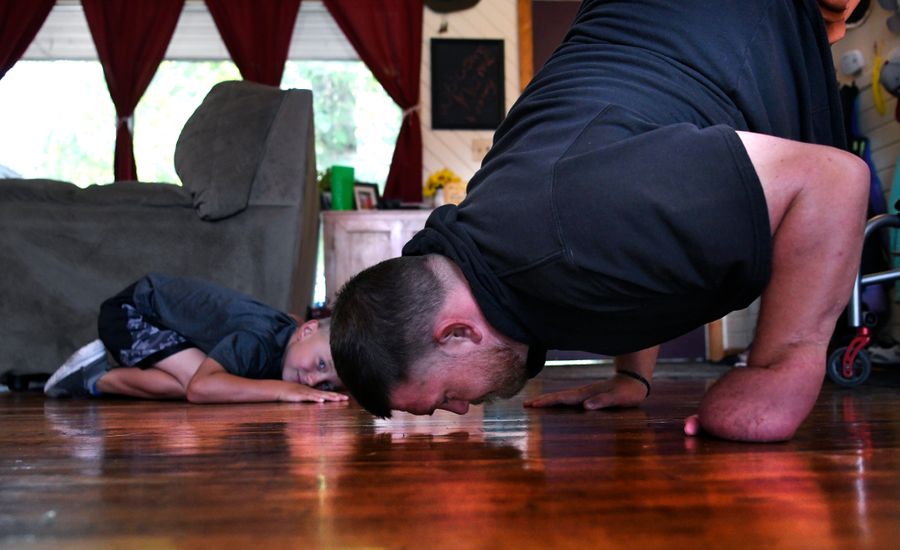 Rodda's son Millo watches Parker do one of his modified burpees that helped him get in shape in jail. During his incarceration, Parker would do up to 500 burpees a day. 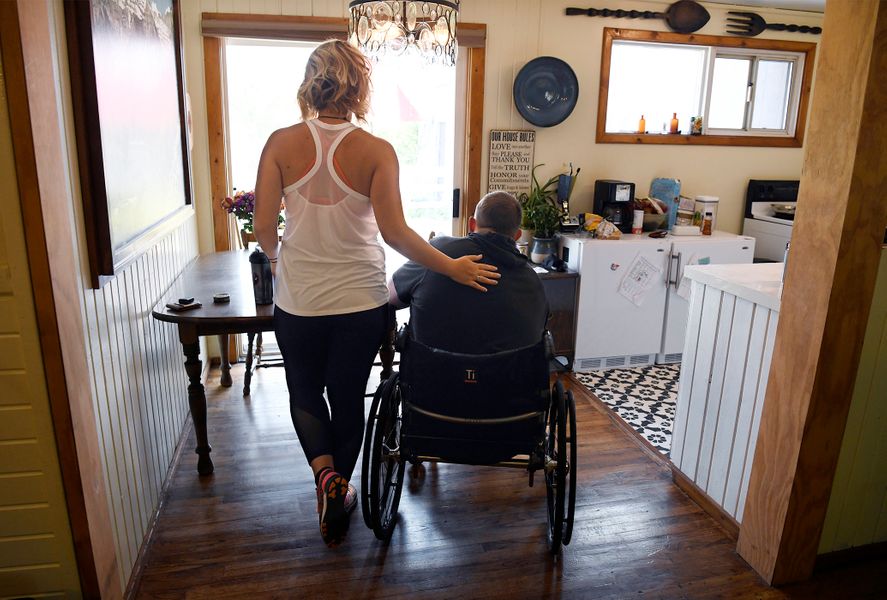 In February 2019, after his last arrest for violating his parole, and with the trust between him and the rest of his family in cinders, Rodda opened her home to Parker. 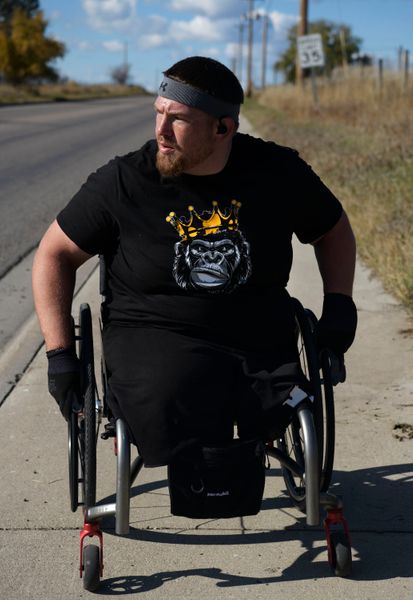 Parker spent most of 2018 in and out of handcuffs, violating his parole a final time by getting caught with methamphetamine. “I’ve been to church, the battlefield, the trap house and jail. I didn’t see God in any of those places." 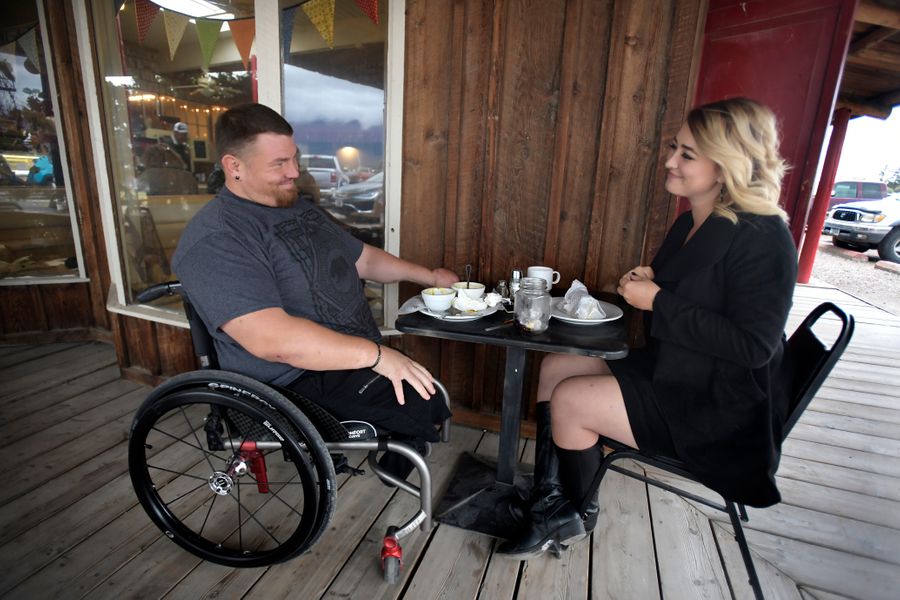 Parker and Rodda eat lunch together at Stella's Deli and Bakery in Ronan. Rodda and Parker have known each other since grade school and their relationship has been a pillar of stability for Parker, even from a jail cell. 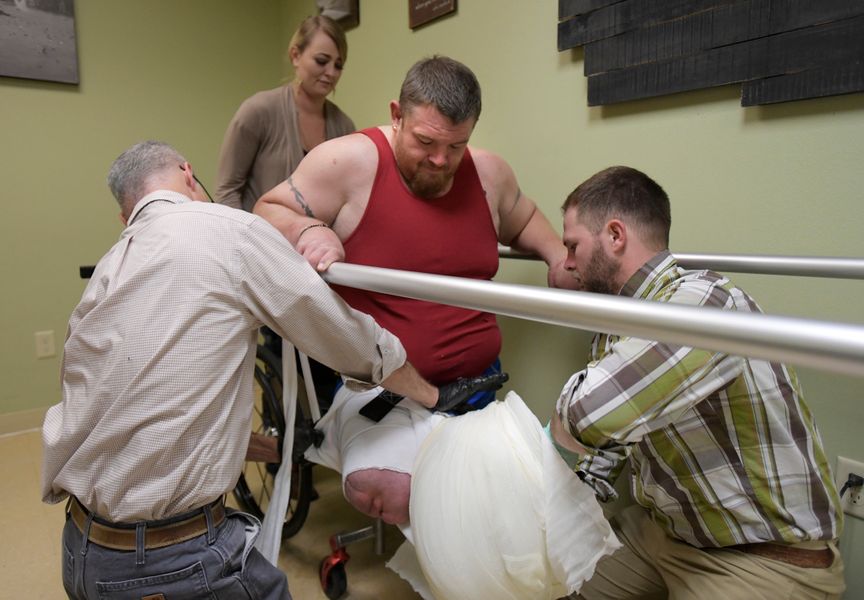 Parker has a mold made for a new set of prosthetic legs that will allow the veteran to walk at his 6-foot, 1-inch stature. Parker lost track of the first set of prosthetics. "I just quit using them. They just ended up in storage. They weren't a priority for me, because I no longer cared." Parker said. Parker will have a new set with which he plans to train at least an hour a day by December 2019. 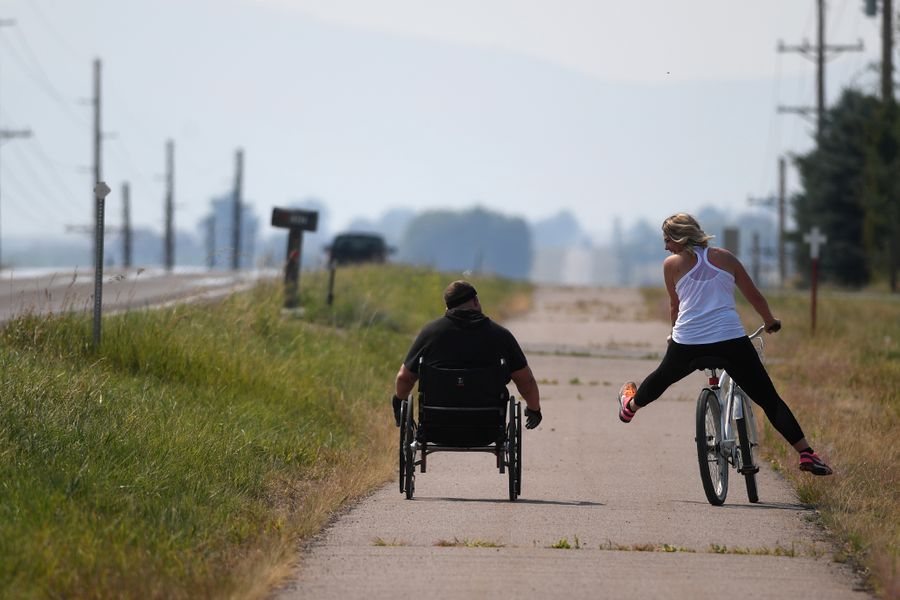 Rodda and Parker tease each other as they work their way through a training session on a smoke-filled summer day in Ronan. "Part of me getting released from prison required that I find somewhere stable and drug-free. That's what she provided, when nobody else could," Parker said.